When I suggest that the ECB could, in principle, end the Euro crisis by printing money (and using that money to buy government debt), a question I am often asked by non-macroeconomists is ‘will this not increase inflation’? The idea that printing money will inevitably lead to inflation is of course the monetarist position.
The appeal of this idea comes from a simple thought experiment. Imagine an economy without banks, where the only money was printed by the government. People hold money because they want to buy things (money as a ‘medium of exchange’), so the demand for money is proportional to the value of overall spending. The government then doubles the supply of this money, by giving everyone a Christmas gift of cash. (This is Freidman’s famous helicopter money.) People will spend this money, because they now have more than they need. If the quantity of goods produced in the economy (‘supply’) is unchanged, we have ‘too much money chasing too few goods’, and excess demand leads to rising prices. People go on spending (the money does not get destroyed) until they have the amount of money they need, which is the same proportion of the total value of spending. The process will only stop when everything costs twice as much. This is the famous ‘neutrality of money’.
The neutrality of money is a very robust proposition. For those mathematically inclined, imagine a set of equations that describe the real economy (output, real wages etc). This real economy includes ‘real balances’: the purchasing power of money, or money divided by prices. Now suppose the government has control of one nominal quantity, money. If we start from an equilibrium where all the equations hold, and double money, then the set of equations will also hold for the same set of real quantities plus a doubled price level, because this gives us the same level of real balances.
Now monetarists have always understood that the process from doubling money to doubling prices may take time. Furthermore, the assumption that supply remains unchanged may not be correct if we start with unemployed resources (i.e. a recession). Freidman was highly critical of the Federal Reserve in the Great Depression for not printing enough money.  However, if in time unemployed resources disappear, any additional money will lead to higher prices.
The thought experiment above involved the government giving people money. But that combines monetary and fiscal policy: it is like a tax cut financed by printing money. A pure monetary policy operation would involve the central bank using its newly printed money to buy assets like government debt. This is what we now call quantitative easing. The neutrality of money idea should still work, because by buying assets the bank raises their price, which lowers interest rates, which encourages more people to borrow and spend. But suppose interest rates have hit a zero lower bound i.e. we are in a liquidity trap. The problem now is that the central bank is swapping money for assets that pay the same as money (because interest rates are zero), so nothing has really happened. There is a lot more to say about whether Quantitative Easing will work in stimulating the economy, but at best that is what it will initially do – output will rise because there are unemployed resources, and prices will not. This is why the Bank of England and the Federal Reserve have printed money like crazy over the last few years.
But when the economy recovers, will not the chickens eventually come home to roost? Inflation must increase in the end, surely – that’s what neutrality implies. But our thought experiment assumed that the money would stay doubled in quantity. A sensible central bank, one the economy recovers, will begin to contract the money supply. Job done, so back to business as usual. If the central bank has bought lots of government debt, it can start selling it. The central bank can certainly start raising interest rates above zero, which will encourage people to switch out of money. So the money supply will shrink back down.
This is just a rather elaborate way of saying that printing money need not be inflationary because it can be temporary. Those who argue that printing money must be inflationary are making an implicit assumption that the extra money is permanently with us, and this is an assumption that need not hold, particularly if monetary policy is in the hands of an inflation targeting independent central bank like the ECB.
If this all sounds too abstract, here is what happened to money (in this case M1) in Japan in the early years of this century. 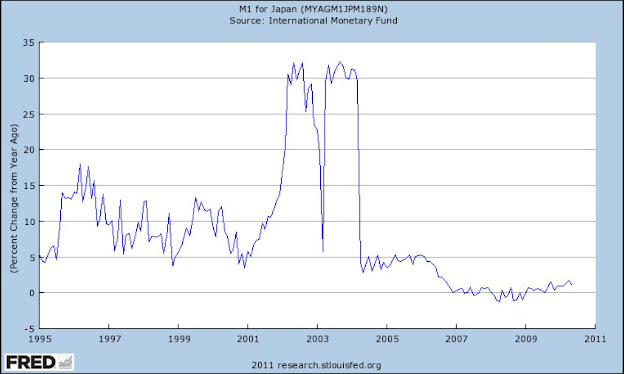 In an effort to boost the economy the Japanese central bank tried a programme of Quantitative Easing, leading to rapid growth in narrow money. Japan was also in a liquidity trap, so broader definitions of money did not increase that much. However inflation did not increase: on average inflation has been zero between 2003 and today. How much it helped expand the economy is still unclear. Below is a graph of the level of the monetary base – the money the central bank actually prints. The expansion in 2003 is clear, but so is the contraction in 2006, when the experiment ended. The bottom line: printing money can be temporary, and will not be inflationary in a recession.