When the Bank of England after the Brexit vote forecast 0.8% GDP growth in 2017, they expected consumption growth to decline to just 1%, with only a small fall in the savings ratio. But consumption growth proved much stronger in the second half of 2016 than the Bank had expected. As this chart from the Resolution Foundation shows, pretty well all the GDP growth through 2016 was down to consumption growth, something they rightly describe as unsustainable. (If consumption is growing but the other components of GDP are not, that implies consumers are eating into their savings. That cannot go on forever) 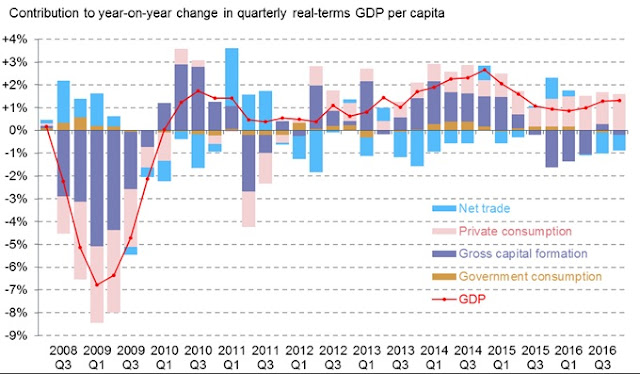 What was going on here? In August, the Bank reasoned that consumers would recognise that Brexit would lead to a significant fall in future income growth, and that they would quickly start reducing their consumption as a result. When that didn’t happen the Bank appeared to adopt something close to the opposite assumption, which is that consumers would assume that Brexit would have little impact on expected income growth. As a result, in the Bank’s February forecast, the savings ratio was expected to decline further in 2018 and 2019, as I noted here. Consumers, in this new forecast, would continually be surprised that income growth was less than they had expected.

The first estimate for 2017 Q1 GDP that came out yesterday showed growth of only 0.3%, about half what the Bank had expected in February. This low growth figure appeared to be mainly down to weakness in sectors associated with consumption (although we will not get the consumption growth figure until the second GDP estimate comes out). So what is going on?

There are three possible explanations. The first, which is the least likely, is that 2017 Q1 is just a blip. The second is that many more consumers are starting to realise that Brexit will indeed mean they are worse off (I noted some polling evidence suggesting that here.), and are now adjusting their spending accordingly The third is that consumption was strong at the end of 2016 because people were buying overseas goods before prices went up as a result of the Brexit deprecation.

If you have followed me so far, you can get an idea of how difficult this kind of forecasting is, and why the huge fuss the Brexiteers made about the August to February revision to the Bank’s forecast was both completely overblown and also probably premature. All Philip Hammond could manage to say about the latest disappointing growth data was how it showed that we needed ‘strong and stable’ government! I suspect, however, that we might be hearing a little less about our strong economy in the next few weeks.

Of course growth could easily pick up in subsequent quarters, particularly if firms take advantage of the temporary ‘sweet spot’ created by the depreciation preceding us actually leaving the EU. Forecasts are almost always wrong. But even if this happens, what I do not think most journalists have realised yet is just how inappropriate it is to use GDP as a measure of economic health after a large depreciation. Because that depreciation makes overseas goods more expensive to buy, people in the UK can see a deterioration in their real income and therefore well being even if GDP growth is reasonable. As I pointed out here, that is why real earnings have fallen since 2010 even though we have had positive (although low) growth in real GDP per head, and as I pointed out here that is why Brexit will make the average UK citizen worse off even if GDP growth does not decline. If it does decline, that just makes things worse.
Posted by Mainly Macro at 08:27