Why are the UK and US more vulnerable to right wing populism? 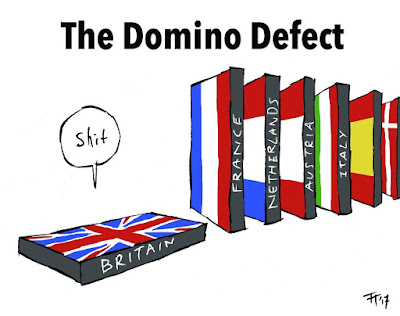 
A week or so ago, anticipating Macron’s victory and following defeats of the far right in Holland and Austria, I asked on twitter why the US and UK seem to be more susceptible to right wing populism than elsewhere. It is a question that requires much more than a post to answer, but I thought the replies to my question were interesting.

Quite rightly, a large number of people questioned the premise. We have populist far right leaders in parts of Eastern Europe, for example. Maybe timing is also important, with the US and UK acting as warnings to other countries.

Nor should differences be exaggerated. Macron is quite unique in his achievements, and a runoff between Le Pen and the conventional right or left might have been closer. Trump lost the popular vote, and the Brexit vote was very close. What exactly is populism anyway: as someone said to me recently, elites use the label populist much as populists use the label elites.

On the other hand, one of the features of the Macron campaign is that he championed all the things that Brexit and Trump led us to believe were now politically unpopular and therefore to some extent compromised, especially globalisation and the EU. A number of people suggested specific features of European economies that might have cushioned the impact of globalisation more effectively: a stronger welfare state, for example, or stronger union power. One way of describing this is to say that neoliberalism has been less successful in Western Europe. Real wage growth has been poor in the UK and US, which may have a wider impact in electoral terms than higher unemployment in Europe.

Another set of suggested explanations focused on the rise of the very rich in the US and UK. Those who had recently achieved much higher incomes and wealth would be naturally keen to keep it, and would therefore do what they could to ensure democracy allowed them to keep (or increase) it. The obvious way to do this is through the media, although recent attempts at voter persuasion discovered by Carole Cadwalladr suggest it is not the only way. The UK press is perceived to be the most biased to the right among this sample of European countries apart from Finland. The US has talk radio and Fox news. These may persuade the non-partisan media to give undue coverage to far right individuals, which then increases their support. To the extent that the very rich are able to influence elections, we get what could be described as a managed democracy.

That in turn may be related to a remark by Matthew Yglesias: “You see in Trump vs Le Pen once again that authoritarian nationalist movements only win with the support of the establishment right.” (The centre-right candidate in the French elections, Fillon, recommended his supporters vote for Macron.) Brexit was enabled by a Conservative leader offering a referendum, and more importantly Brexit was encouraged by his party attempting to shift the blame for austerity on to immigrants. Trump has been embraced by the Republican party. This narrative fits with this past post of mine.

It seems to me that these various explanations are quite compatible with each other. Where what we might call neoliberal policies had been strong - weak unions, declining welfare state, stagnant wages - these policies created a very large group in society that were looking for someone to blame. In a managed economy that allowed the parties of the right either to use nationalism and anti-immigration rhetoric to deflect blame from themselves, or for the far right to capture those parties. As that rhetoric also hit out at globalisation it potentially was a direct threat to global business interests, but those interests could either do nothing about this or felt they could manage that threat.

One final set of answers to my original question focused on history. Europe still has enough memory of living under authoritarian nationalist governments to want to avoid going down that route again. (Macron’s vote was highest amongst the 70+ age group.) The UK and US do not have that experience, and perhaps nostalgia for empire (or WWII) in the case of the UK or watching an empire decline in the case of the US created unique tensions.

While these are dark times to be living through (and I suspect many others besides myself certainly think they are), for anyone interested in political economy they are also fascinating times.