Could austerity’s impact be persistent

How Conservative macroeconomic policy may be making us persistently poorer

I was happy to sign a letter from mainly academic economists published in the Observer yesterday, supporting the overall direction of Labour’s macroeconomic policy. I would also have been happy to sign something from the Liberal Democrats, who with a similar macroeconomic stance have the added advantage of being against Brexit, but no such letter exists. As I have said before about letters, it is the overall message that counts. We desperately need more public investment and more current spending to boost demand, which in turn will allow interest rates to come away from their lower bound.

If I could carry just one message into mediamacro to bring it more into line with macro theory, it is that nominal interest at their lower bound represent a policy failure. Unconventional monetary policy is a very unreliable substitute for interest rate changes and fiscal policy as a way of controlling the economy, and a temporary fiscal stimulus can reliably get interest rates off their lower bound. This was the big mistake that most advanced countries made in 2010, and painfully slow recoveries were the result. The UK is currently making the same mistake, which is why the macroeconomic impact of the Labour and LibDem programmes is so much better than the Conservatives’ continuing austerity.

In the textbook macroeconomic models, this policy mistake can have a large but temporary cost in terms of lost output and lower living standards. This is because in these basic models a short term lack of demand does not have an impact on supply. Output in the longer run is determined by the number of those wanting to work, the capital stock and technology, all three of which are assumed to be independent of short term demand shortages. However it looks increasingly like these textbook models can be wrong.

In a new study (pdf), Gustav Horn and colleagues at the IMK institute in Germany looked at how persistent the impact of negative fiscal shocks (higher taxes or lower spending) had been on output. Their analysis is a refinement of earlier studies by of Blanchard and Leigh, and more recently Fatas and Summers. They find that the impact of recent fiscal shocks have been persistent rather than temporary, at least so far.

Although this persistent impact is not part of textbook models, economists have explored effects of this kind (the collective name for which is ‘hysteresis’). There are many theories about why it could happen, such as theories of endogenous growth. I explored the idea of an innovations gap in a recent post. To see why this possibility is so important, take the example of UK austerity in financial years 2010/11 and 2011/12. A few years ago I took the OBR’s (conservative) assessment of its impact on GDP growth in those two years, and assumed that the impact of fiscal consolidation had completely unwound by 2013. That gave you a total cumulated cost of austerity of 5% of GDP (1+2+2), or £4,000 per household.

What happens if instead the impact of austerity is much more persistent? I can no longer use the OBR’s numbers, because they assume impacts die out over time. Instead, let me make the fairly conservative assumption that each 1% reduction in the cyclically adjusted deficit reduces GDP by 0.7%, but these effects are permanent. I’ve chosen 0.7 because that gives a similar answer for the cost of austerity by 2012 as my previous calculation. But rather than disappearing in 2013, these cost persist and grow with each additional act of consolidation. By 2016/17 GDP would be lower by nearly 4%, and a further 1% would be added by the planned additional austerity until 2019/20. If you accumulate those losses, it means that the average household would have lost a staggering £13,000 by 2016/17, rising to £23,000 3 years later.

If you think that sounds a ridiculously large number, just compare output or income relative to past trends. Here is a version from the IFS. 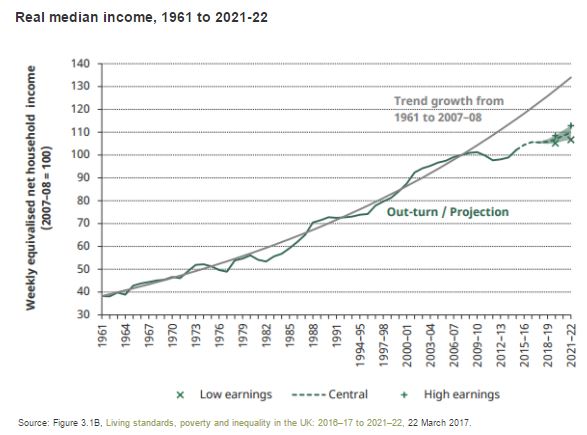 Once you see this data, claims that we have a strong economy become laughable. UK median incomes are currently over 15% below previous trends. That is more than enough room to accommodate 4% due to a permanent effect from austerity.

I do not have to argue that such permanent effects are certain to have occurred. The numbers are so large that all I need is to attach a non-negligible probability to this possibility. Once you do that it means we should avoid austerity at all costs. In 2010 austerity was justified by imagined bond market panics, but no one is suggesting that today. The only way to describe current Conservative policy is pre-Keynesian nonsense, and incredibly harmful nonsense at that. That was why I signed the letter.