Today we are in the middle of an Omicron wave, but I want to go back to mid-November. The BBC News at Ten on 15th November 2021 ran as its second item the extension of booster jabs to over 40s (if people could get them). It showed PM Johnson talking about storm clouds of a new COVID wave gathering in Europe, and we saw him say that this might ‘wash up’ in the UK. Nothing much more was said, besides the ritual reporting of UK COVID numbers.

What information did that segment convey to viewers who were not otherwise informed (and most viewers would not be otherwise informed)  about COVID numbers in the UK and Europe? It suggested cases are low and stable in the UK, but rising in Europe, and that is exactly the impression he wanted to give. Here is a chart of cases in the big three EU countries and our immediate neighbours close to the time he spoke. 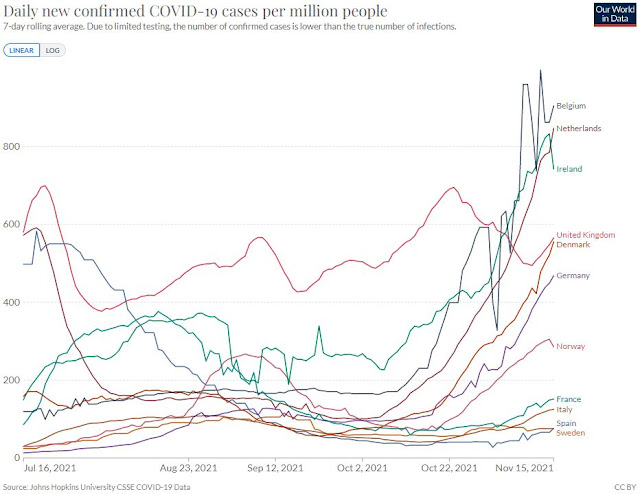 Since mid-August, UK cases were higher in the UK than all these countries, and in most cases a lot higher. It’s not because we test more, because our deaths have also been higher. COVID was rising in most of the countries shown on this chart, including the UK. Only three of these ten non-UK countries at that time had cases above the UK.

So the idea that a European wave was about to hit a relatively COVID free UK is far from reality. But the BBC did not even try to correct the impression given by Johnson. So why did the BBC broadcast the clip from the PM? It contained misleading information rather than any useful information. Wouldn’t viewers have been better off with a short piece from its own health reporter or some outside expert about the potential ‘COVID threat from Europe’? The BBC’s mission is to inform, explain and entertain. Which category did the clip from Johnson fit into?

Let’s move to the most important issue of our time, climate change. COP26 was a golden opportunity for the media to inform and educate the public in its news reporting on the summit. As this article by two climate experts notes, such reporting was the exception rather than the rule. The rule was reporting the spin put out by politicians, like Johnson, who wanted to suggest it was a success. We got Johnson’s strange football analogies which, to be frank, tells its viewers nothing.

To claim that to do the detail is impossible inside the constraints of a 30 minute news programme is just false. Look at this short briefing in the excellent Tortoise newsletter that evaluates the summit in terms of likely degrees of global warming. Journalists cannot complain about lack of time when so much airtime is taken up by VoxPops. The problem will continue in the future. Grand promises and targets set by politicians will get headlines, but the individual measures needed to meet those targets will most of the time be ignored. Reports from the Committee on Climate Change should get headline billing, but they don’t.

This is the context to view the failures in economics reporting which played a major role both in popularising the deficit deceit behind austerity and played a decisive role in muddying the economic waters in the Brexit referendum vote. These are primarily not the result of some peculiar problem with economics (although those exist [1]). Just as with COVID and climate change, macroeconomics in particular is portrayed in a way that has little to do with how most academics think.

The idea that news broadcasting does very little to explain what is going on, but instead consists of surface trivia, is hardly new. To my knowledge it was first put forward by Peter Jay and John Birt, who wrote “There is a bias in television journalism. Not against any particular party or point of view – it is a bias against understanding.” As I wrote, their attempt to get more expertise into broadcasting largely failed, even though one of them became Director General.

The reasons it failed, in my view, are twofold. First, there are some news ‘values’ that are so ingrained in journalism that fight against it. The biggest of these is immediacy: the need to be first with news, and the associated view that anything that happened more than a few days ago is ‘old news’. 24 hour TV News has not helped here. Ironically these values are internal, and do not reflect what people want. Viewers always respond better to news items that tell a story, and explanations can be made into stories.

Second, which particularly influences the BBC, is national politicians. Politicians determine how much money the BBC will get, and with this current government its very existence. As a result, news reporting in particular has to make politicians happy, and they are happy when they are on TV or when Westminster gossip is discussed. This helps explain the incredible visibility and influence of the broadcaster companies’ political reporters, and the more subservient role played by subject journalists. Channel 4 News, which until now has suffered less from these pressures, does more than other networks to inform its audience.

This is why expert knowledge plays second fiddle to the views of politicians. Experts are bumped from programs they are invited on to be replaced by politicians (as I and others have experienced), but never the other way around. Now you may say rightly so, because we need to see our elected representatives, but we also spend a lot of money on academic research, so shouldn’t academic expertise be heard too?

Journalism will not change in a hurry, but that doesn’t mean academics cannot do things to improve matters. Having individual academics, of contrasting views, battle things out in programmes like Newsnight tells viewers little. But often there is a clear consensus in economics, medicine and climate change, and academics need to get much better at communicating that consensus.

The first way to do that is to have strong representative institutions. The second is that these institutions need to have good ways of knowing what the academic consensus is. That may not be necessary most of the time in physics, but it is required when it comes to when to lockdown in the pre-vaccine stages of a pandemic, how much politicians are meeting their own climate targets, and whether government deficits matter in recessions.

Once in place, these institutions need to be bold in getting that consensus across. Let me use a concrete example from the past. After the referendum, the Royal Economic Society complained about the way views on the economic effects of Brexit had been presented as two opposing views, when in reality there was an overwhelming consensus that it would be bad for the economy (a consensus that proved correct). In an exchange of letters the BBC defended their position, and the RES took no further action.

It was this kind of pressure that first got the BBC to stop putting climate change scientists against deniers in debates. (Although there remain occasional lapses, the claims from deniers that there is no ‘balance’ largely goes unheeded among the broadcasters.) We need to make it impossible for journalists to claim that they don’t know what the consensus is, and we need to put institutional pressure on the broadcasters when they let politicians distort academic knowledge.

[1] There are two problems peculiar to macroeconomics. The first is that too many people among politicians and broadcasters already think they know how the economy works. The second is the excessive reliance on opinion from City economists.