That referendum was fun. Shall we do it again?

Whether the UK as a whole gets to choose whether to have a referendum on continuing membership of the European Union depends on the result of the general election in 2015. Given that we have this choice, it is worth thinking about similarities and differences between the EU referendum and the referendum on Scottish independence.

The key similarity is that the immediate economic consequences of independence in both cases are negative: according to John Van Reenen, even more so with the UK leaving the EU. In both cases nationalism will play an important role. I would argue that in both cases independence is seen by many as a means to a particular end. With Scotland, it was a way of ensuring that Scotland would not be governed by a right wing Conservative party. With the EU, it is a way of stopping large scale migration into the UK.

Is another similarity that the established parties are likely to be united in arguing against independence? There must be serious doubt about this. I suspect that Cameron has a strong preference for continued membership, and even that in his eyes the referendum is largely a political ploy to stop Conservative voters moving to UKIP in 2015. However Cameron also has a preference for remaining the leader of his party. He is very unlikely to get significant changes to the terms of EU membership before the referendum, including the free movement of labour. There are said to be between 50 and 100 Conservative MPs who will argue for leaving the EU whatever the outcome of Cameron’s negotiations. There are about 300 Conservative MPs at present. It is therefore possible that, once the negotiations have ended with little gained, a majority of Tory MPs will want to exit from the EU.

This leads to one clear difference between the two referendums. I think it is fair to say that outside Scotland few took the chances of a Yes vote seriously until the final weeks of the campaign. There are three reasons for thinking that will not happen with the EU referendum. First, UK public opinion has until quite recently shown a majority in favour of leaving the EU. Here are the polls conducted by YouGov. 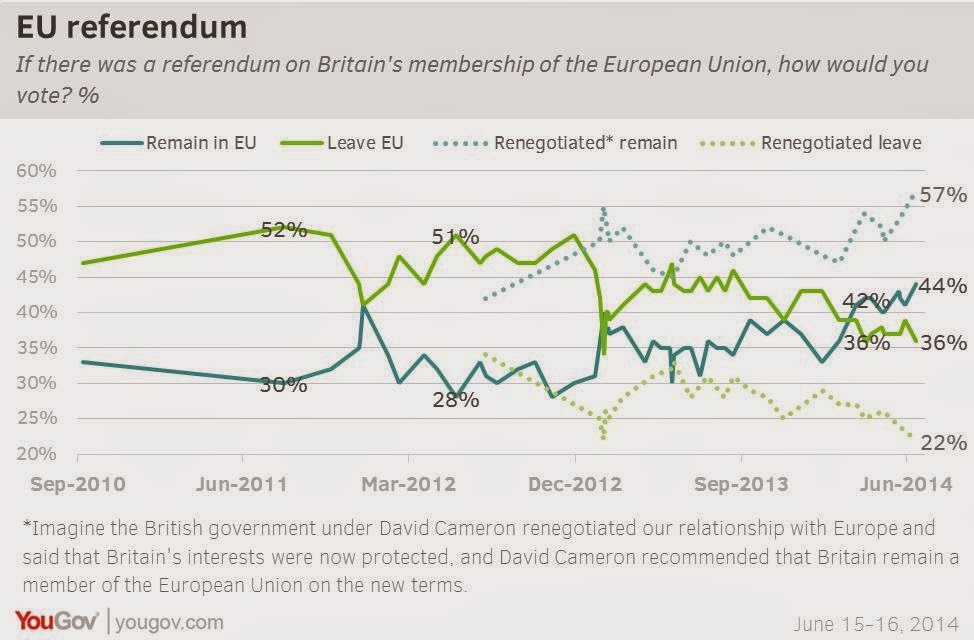 Second, unlike Scottish independence, a majority of the UK press will be arguing for exit from the EU. Third, to make his negotiating stance credible, Cameron will have to at least give the impression that he might decide to recommend leaving the EU if he does not get significant concessions. As I note above, he will not have to try very hard.

This has an important implication which I think has been underestimated by many. Once the election result is known in 2015, if the Conservatives win there is a distinct possibility that the UK may vote to leave the EU. That kind of uncertainty is likely to be bad for non-residential investment, during a period in which we might hope that investment demand takes over from consumption as a primary driver of growth. We also know that, if the Conservatives win the next election, there will be a renewed fiscal contraction. With interest rates likely to be close to their lower bound, there remains limited scope for monetary stimulus to counter these influences.

So this is one important difference between the two referendums. Because most people were assuming a No vote until the last few weeks of the Scottish campaign, it seems unlikely there was sufficient uncertainty for a long enough period to have damaged the Scottish economy, and as far as I know there is no evidence that it did. In contrast, the two years of uncertainty from 2015 and 2017 is almost bound to be damaging for the UK economy.