Keynes and the Macmillan committee 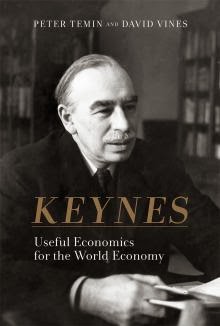 This book, by Peter Temin and David Vines, has just been published. As you can see from the endorsements, I liked the book. In this post I just want to focus on a particular chapter, which was Keynes’s role as part of the Macmillan committee, an episode I did not know about before. Just as the book does so well, I want to draw parallels between the past and current events.

It is the end of 1929: UK unemployment was already high as a result of going back on to the gold standard five years earlier, and Wall Street had just crashed. The new Labour government was overwhelmed, so in the British tradition it set up a committee to recommend what to do, and Keynes was a member. As Temin and Vines note, although Keynes was at the centre of economic discussion at the time, he was also outside the establishment, as a result of publishing his attack on the Versailles treaty in the Economic Consequences of the Peace.

Keynes diagnosis of why British unemployment was so high linked returning to the gold standard at an uncompetitive level and the problems of downward nominal wage adjustment. The book’s description of how the then governor of the Bank of England, Montagu Norman, failed to see the problem is amusing - from a distance of nearly a century - but of course as the book points out this is exactly the ‘conversation’ that Germany is currently having with the rest of the Eurozone.

The obvious solution was therefore devaluation, and the book seems a little ambivalent about whether that was not much discussed because it was ‘off the table’ for political reasons, or whether Keynes and others thought that, having joined (which Keynes had opposed), Britain should stay the course. (Eurozone parallels again. Ironically Britain did devalue three months after the report was published, although as I note here, this was forced rather than a choice.) What Keynes argued for was instead increased government spending, but he failed to convince the committee that its impact on unemployment would not be crowded out. Here Temin and Vines attribute this failure not to the ability of the others to see the obvious, but to the fact that Keynes arguments did not fit with the model he was using, which was the model of the Treatise. They write: “the Macmillan Committee is of interest to us because Keynes’ presentations to it didn’t add up to a coherent view. Rather, they show Keynes thinking on his feet at a time when his ideas were in flux.” Those ideas ended up, of course, with the General Theory.

Finally, one thought of my own. When I was younger, I drew the wrong inference about the Great Depression. If only the General Theory had been written 10 years earlier, I reasoned, much of the agony of the Great Depression could have been avoided. Instead I should have focused on the gold standard. Not because this was more important as a cause of the world wide Great Depression - it well might have been - but because of what it tells you about the influences on macroeconomic policy.

Montagu Norman said to the committee “I have never been able to see myself why for the last few years it should have been impossible for industry, starting from within, to have readjusted its own position”. This was a few years after the General Strike of 1926! This was not someone lacking a coherent theory, but someone blind to the evidence and human nature, and enthralled to the ideology of the gold standard. No doubt being a central banker rather than a worker, or even an industrialist, helped this blindness. The lesson I should have drawn from the Great Depression is that a powerful ideology, in the hands of people remote from those adversely affected by it, can overcome common sense and evidence.