It’s like 2016 all over again. Lots of forecasts of how much poorer we will be under different Brexit scenarios, which if the last time this happened is anything to go by will be ignored or dismissed by around half the UK population. Perhaps I should call for a total and complete shutdown of pronouncements by experts until our country's representatives can figure out what the hell is going on.

More seriously, what has led to this apparent distrust in the words of experts? I want to focus on experts in particular, rather than the more general concept of elites, and even more specifically experts from academic institutions or places directly tied to them. Will Davies has a nice account of the many reasons why distrust in politicians in the UK has increased, but a lot of what he has to say does not really apply to academia.

I have to admit to being completely partial in believing that once society starts ignoring what the evidence says it is on a road to ruin, and academics in the sciences (including the social sciences) have as their raison d'etre trying to understand evidence. And to be fair, much of society understands that. As an IPSOS MORI survey consistently shows for the UK, academics (‘professors’) regularly come close to the top of groups that people trust most. 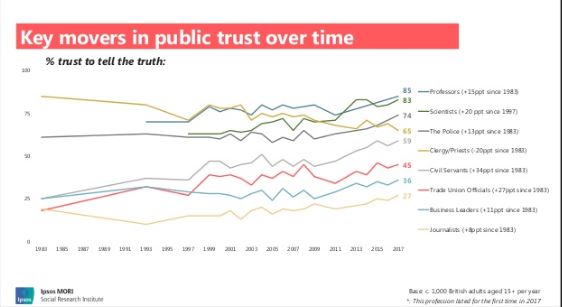 Furthermore, if anything public trust in professors or scientists has been growing rather than falling over time. The same is also true of social trust in the UK, contrary to many popular accounts.

These results suggest that there has not been any recent decline in how much academics are trusted. But if you replace ‘professors’ by ‘economists’, levels of trust decline sharply. [1] And for good reason. I would have fairly low levels of trust in probably what most economists I see in the mainstream media say, and this is because I most frequently see economists in the media who are not academics. They are typically doing one of two things. The first is making up stories (sometimes plausible stories, but still based on zero evidence) about market movements. The second is describing macro forecasts: a necessary but highly unreliable activity.

Many journalists do not understand the difference between these kind of forecasts (‘unconditional’) and the kind of analysis presented on the economic effects of Brexit (‘conditional’). The analogy I tend to use is between a doctor telling you that you are more likely to die of a heart attack if you eat too much fat (‘conditional’), and a doctor trying to predict your exact time of getting a heart attack (‘unconditional’). This failure to understand the difference between the two activities is the first major reason why academics who say Brexit will reduce living standards are not trusted as much as they should be. It is predominantly a failure of the media rather than economists themselves.

I sometimes wonder, however, if certain journalists and politicians deliberately choose not to understand the difference between the two because it suits them to remain ignorant. This brings me to the second reason that academic economists may be ignored or dismissed over Brexit, and that is because certain elites have an interest in doing so. Here is Stewart Wood reacting to Jacob Rees-Mogg’s comments on Mark Carney after the Bank released some of its Brexit analysis.

The Bank’s analysis is of course not beyond criticism. [2] But the attacks of the Brexiter elite are quite deliberately not economic in character but political: Rees Mogg claimed Carney is a second rate politician (a second rate foreign politician!) and his forecast is designed to produce a political outcome (‘Project Hysteria’). The idea is to suggest that these projections should not be taken as a warning by experts but instead as a political act. Once again, I’m not suggesting we should never think about what an experts own interests might be, but if you carry this line of thought to the Rees Mogg extreme you undermine all expertise that is not ideologically based, which is exactly what Rees Mogg wants to do.

This I think is the second reason why the view of the overwhelming majority academic economists that Brexit will be harmful is going to be ignored by many. Since Mrs Thatcher and the 364 economists, the neoliberal right has had an interest in discrediting economic expertise, and replacing academic economists with City economists in positions of influence. (Despite what most journalists will tell you, the 364 were correct that tightening fiscal policy delayed the recovery.) Right wing think tanks like the IEA are particularly useful in this respect, partly because the media often makes no distinction between independent academics and think tank employees. Just look at how the media began to treat climate change as controversial.

But isn’t there a paradox here? Why would members of the public, who have little trust in politicians compared to academics, believe politicians and their backers when they attack academics? In the case of Brexit, and I think other issues like austerity, these elites have two advantages. The first is access. Through a dominance of the printed media, a right wing elite can get a message across despite it being misleading or simply untrue. Remember how Labour’s fiscal profligacy caused record deficits? Half the country believe this to be a fact despite it being an obvious lie. What will most journalists tell you about Brexit and forecasts? My guess is that forecasters got the immediate impact of Brexit very wrong, rather than the reality that what they expected to happen immediately happened more gradually. Why will journalists get these things wrong? Because they read repeated messages about failed forecasts in the right wing press, but very little about how GDP is currently around 2.5% lower as a result of Brexit, and real wages are lower still.

The second is that the elite often plays on a simple understanding of how things work, and dismisses anything more complex, when it suits them. Immigrants ‘obviously’ increase competition for scarce public resources, because people typically fail to allow for immigrants adding to public services either directly or through their taxes. The government should ‘obviously’ tighten its belt when consumers are having to do the same, and so on. In the case of the economic effects of Brexit, it is obvious that we will save money by not paying in to the EU, whereas everything else is uncertain and who believes forecasts etc.

As the earlier reference to Mrs Thatcher suggests, there is a common pattern to these attacks by elites on experts: they come from the neoliberal right. If you want to call the Blair/Brown years neoliberal as well, you have to make a distinction between right and left. The Blair/Brown period was a high point for the influence of academics in general and academic economists in particular on government. As I note here, Iraq was the exception not the rule, for clear reasons. Attacks by elites on experts tend to come from the political right and not the left, and the neoliberal right in particular because they have an ideology to sell.

[1] See this YouGov poll. Thanks to John Appleby for finding this for me.

[2] For example, including a ‘worst case’ No Deal scenario designed for stress testing banks in a graph alongside more standard projections of the impact of the Withdrawal agreement is just asking for misinterpretation of the former.