MPs need to get real about Brexit

If, as is widely expected, MPs reject the deal that Theresa May has done with the EU, they will have put this country in a very dangerous position. I say this not to encourage acceptance of the deal, but to emphasise that this negative act needs to be accompanied by a collective positive one. If it isn’t then we either leave without any deal (an outcome that only the ill informed, the mad and the Brexiter wish for) or MPs will just end up accepting May’s deal.

Like annoying noise on a railway train, the best thing to do with complaints from Brexiters is to ignore them. Once May’s deal falls, they are no longer part of the equation. They will never get rid of the backstop unless there is No Deal. May extended the backstop to cover the whole UK and so now the UK is in the backstop until the EU says we can leave. The best way to look at what the Brexiters are doing is that they want to sabotage any solution so we leave with No Deal. Luckily we can ignore them if MPs, rather than May, is in control.

There seems to be a lot of talk about Norway plus a Customs Union as a potential way out once May’s deal is rejected. It is, after all, what any Prime Minister worthy of that title would have had in mind from the start, because it superficially appears something that could unite the 52% and 48%. But as I have argued before, thinking about compromises of this kind does not work with Brexit. Here is a not very pretty diagram that illustrates what I mean. It plots various options on two axes, economic welfare and sovereignty, in relation to where we are within the EU. (Staying in the EU is where the two axes cross i.e. zero on both axes.) 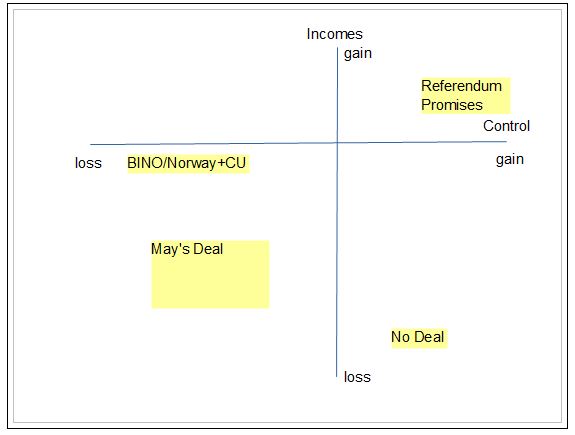 Leave voters wanted more control over events and a better life. That is what they were promised. That combination is just not possible by leaving the EU.

A compromise of sorts for Leavers would be to give them greater sovereignty at a very large economic cost to themselves and others. This is No Deal. It is not an option that most MPs can accept for very good reasons. Even if you believe the reports that some leavers would sacrifice everything for more control (I don’t), you cannot justify imposing that kind of cost on the other (more than) half of the country. It will only happen if MPs really screw things up.

May’s Deal is a large yellow square because it leaves many issues unresolved, partly in an attempt to keep Brexiters on board. Any deal May does will end Freedom of Movement (FoM), so you have a little more control if you never intend to work abroad, but a lot less control if you wanted this as an option. But any positive on this account is negated by making the backstop UK wide. By leaving the Single Market for services, it has a significant economic cost (details here, summary here).

The position of Norway plus a Customs Union, which is very similar to staying in transition or what I call Brexit in Name Only (BINO), is that it reduces as far as possible the economic cost of Brexit. However it quite clearly loses a lot of control compared to staying in the EU. In the EU we have a say and a veto over key issues, while with BINO there is no UK veto. I prefer to call this BINO rather than EEA+ or whatever because this name describes what it is.

To be clear, BINO is better than May’s deal (as the forward to this should perhaps have made clearer). They both give up sovereignty, but because BINO keeps us in the Single Market and Customs Union it is clearly better in economic terms. But once May’s deal falls at the first attempt, MPs need to come up with an alternative that commands a majority in the house if they are really going to take back control from ruinous May. Going back to renegotiate the deal, even if it were possible which seems unlikely, is not going to produce anything that is fundamentally different from the deal MPs reject.

If MPs want to take back control they will have to choose between a second referendum (or just revoking A50) and BINO. Which you prefer I suspect depends entirely on how you see the politics of Brexit. If you think the first referendum requires Leavers to have something to take away as a victory, then BINO is a price worth paying to avoid alienating voters. The problem with that argument is that the Brexiters and more importantly the press will be quick to point out that they now have even less control over their lives (they have been ‘cheated’), and for once they would be right. BINO can be seen as the ultimate insult to Leave voters: you asked to leave the EU, so we have technically done so, and we hope you do not notice that you now have even less of what you wanted Brexit to give you.