The Media and the Public 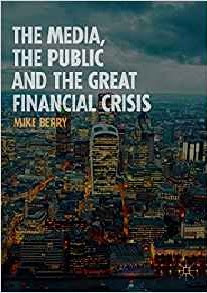 If you take note of the growing evidence that the partisan media can influence public opinion rather than simply reflect it, then this new book by Mike Berry (full title ‘The Media, The Public and the Great Financial Crisis’) is a must read. At its heart is content analysis (what the media said) and audience studies of two key periods: the Global Financial Crisis (GFC) and Austerity.

There is a wealth of fascinating material here, which I couldn’t possibly summarise with any adequacy in a single post. Instead I want to focus on the two final chapters. The first helps explains why large sections of the public were so receptive to the 'Labour profligacy caused the crisis' myth. The second involves discussions with journalists.

I have written in the past (and also in my own book) about why the suggestion that Labour profligacy caused the deficit is simply untrue. The deficit was unremarkable in 2007, and exploded because of the GFC. I have focused on how this untruth was repeated endlessly by Coalition politicians and the right wing press, and how it was not challenged by the broadcast media or the Labour party.

What Chapter 6 of Mike’s book shows is why this idea of Labour profligacy caught on so easily. Between the early 2000s and 2010 the right wing press (in Mike’s sample the Telegraph, Mail and Sun) began to publish more and more stories about public sector waste. Now defenders of the press might argue that there was more waste because of a Labour government, but the number of stories in these papers increased over the period by 600%. A much more plausible explanation was that these papers were trying to undermine what the Labour government was doing, particularly as it was popular.

In this way readers of these papers were primed for the idea that Labour was being profligate. As a result, something that was clearly false could be sold as true. The idea that the media is ‘only reflecting the views of their readers’ is so obviously false in this case, because any journalist worth their salt could look up deficit figures, see that the recession caused the deficit to rise, and inform their readers. In reality these papers promoted the lies, and the non-partisan media did not bother to correct them.

I found the chapter where prominent journalists were interviewed fascinating. Again I will focus on austerity. One of those interviewed was Kevin Maguire, political editor of the Mirror. He talks about how the real reasons for the deficit were presented in the Mirror, but


So why did the broadcast media start obsessing with the need to reduce the deficit? What is clear from Mike’s interviews with Robert Peston and Evan Davis is that the broadcasters really believed a large deficit was a problem of the utmost importance that needed to be tackled. The book contains extracts from his interview with Evan which I abbreviate here.

Evan: “Simon Wren-Lewis comes with a very strong Keynesian view, which is I think incidentally perfectly sensible …. But that’s quite different from saying that we should just blithely come and just say don’t worry about the deficit”

Interviewer: “Do you think you fairly represented all of these opinions, because he thinks you focused far too much on …

Evan: “Yes, but … people who hold a strong and rigid position on an issue find it very difficult not to see that we’re biased against them on anything, and Simon Wren-Lewis is in that …

“However as the analysis in Chap. 2 demonstrated during the sample period in 2009 when the deficit became a major political issue there were no sources - outside of Labour - who were given space to put the Keynesian view in comparison to a range of sources who put the case for a faster pace of fiscal consolidation.”


A journalist might say gotcha. So it wasn't the imagination of a 'rigid' Keynesian: the BBC really did promote austerity. You can see why I also treat BBC claims that they told everyone that more than 90% of economists thought Brexit would be harmful with a large pinch of salt.

If you want to understand political developments since the GFC you have to understand the media, and that means collecting and analysing hard data in the way that Mike and others media studies academics do. What Mike does so successfully in this book is show how stories in the press were reflected in people’s attitudes and how this can have a profound influence on the political climate and therefore what politicians do.