Those promoting Brexit are fond of saying that it’s not about economics. Gary Younge in the Guardian tells us that there is nothing wrong with poorer people voting to be worse off, and of course he is right if that is what they knowingly do. But polling evidence suggests that only a small proportion of Leavers think the economy will be worse because of Brexit. Here are the results from three consecutive ORB polls (via here) where the respondents are only Leave voters.


In May of last year, only 16% of Leave voters thought the economy would be worse off after Brexit, and incredibly 42% thought it would be better. As the table shows this view has only begun to shift in the last few months, and as John Curtice points out this has coincided for the first time with more Leavers than Remainers changing their minds about Brexit.

This tells us two important things. First, the Project Fear mantra worked. The Leave campaign, with the essential help of the Brexit press, managed to convince people that all this talk that the economy would be worse off after Brexit was false. Second, when the small percentage who think Brexit will damage the economy increases, support for Leave falls. Correlation does not prove causation, but this evidence suggests we should be sceptical about claims that Brexit is all about values and not about the economy.

So why are some Leave voters only now realising that Brexit will have a negative impact on the economy, and three quarters still think otherwise? After all, everyone was made worse off as inflation increased following the collapse in sterling immediately after the vote. According to one study, by the third quarter of 2017 the average consumer was worse off by £400 as a direct result of paying higher prices for imported goods following that depreciation.

The problem of course is that those price rises didn’t have a ‘made by Brexit’ tag attached to them. If you read the Financial Times of course you understood the connection, but if you read a Brexit newspaper and watched the 10 o’clock news those connections will not have been made, or if they were they would be muddled by Brexiters claiming the depreciation would be great for exports. It wasn’t great for exports, for straightforward reasons. I suspect some Leavers are only now changing their mind about Project Fear because they are seeing on the news iconic UK companies either cancelling investment projects or threatening to leave because of Brexit.

The problem is that there is no mirror image of the UK economy that didn’t vote for Brexit that voters can easily look at and see how much they are currently worse off. People cannot easily see that they are already paying a price for Brexit because firms and markets are anticipating what will happen after we leave. But it is possible to do the next best thing, and try to create a synthetic UK economy that didn’t vote for Brexit by looking at how other similar economies are doing. We know the UK has moved from around the top to around the bottom of the international growth league, but what does that actually mean for individual households?

That is the exercise that John Springfield at the Centre for European Reform is regularly doing, and he calculates that GDP was 2.3% lower in September 2018 as a result of the Brexit vote. That roughly translates into the average household losing almost £2000 worth of resources (mainly lower private consumption, but also lost public spending and investment). This number is broadly consistent with estimates the Governor of the Bank of England gave in May, using a different method.

To get a handle on how much public resources we are currently losing as a result of Brexit, Springfield calculates that GDP loss would amount to taxes being lower by £17 billion a year. Given the way this government runs its fiscal policy, that means we could have had tens of thousands more police officers and nurses if Brexit had not happened. This isn’t a forecast, but an estimate of what Brexit has already cost us.

Why has Brexit slowed the economy by enough to lose the average household resources worth almost £2,000 before we have even left? The answer is down to anticipation and uncertainty over what Brexit will mean. The foreign exchange markets had to anticipate the impact Brexit would have on future UK trade, and that was a major reason why there was an immediate collapse in sterling after the vote. Uncertainty about which kind of Brexit the UK would choose has mainly affected investment. In the chart below the Bank of England show how business investment has flatlined since the referendum, when the evidence from previous recoveries suggest it should have shown strong growth. 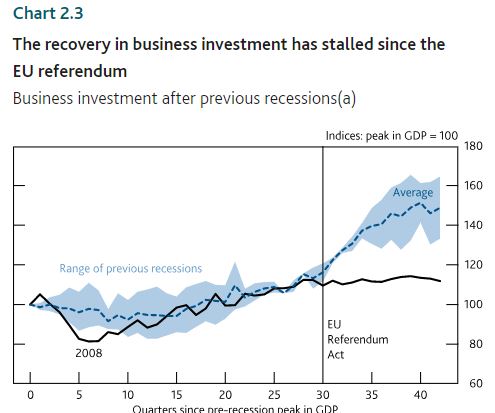 In addition the number of foreign direct investment projects coming to the UK, which was on a rising trend until 2015, has been falling since the 2015 election when it became clear there would be a referendum.

Will investment bounce back once Brexit uncertainty has been resolved? Certainly not if we leave with no deal, because industry's worst fears will have been realised. Even if we leave on the terms of the current Withdrawal Agreement there are two reasons to think the investment bounce back will be small. First uncertainty does not disappear. Will the government manage to agree a new trade relationship before the transition period runs out, or will we go over another No Deal cliff edge? Second, the decline in investment involves some anticipation as well as uncertainty, with a lot of service sector investment diverted towards investment in the remaining EU economies. All the time investment in the UK remains depressed this eats away at our ability to produce, at our productivity and therefore future living standards. As austerity showed, prolonged periods where the economy is depressed will have permanent negative effects.

Imagine if someone came to every Leavers door demanding nearly £2,000 for their household’s current contribution to Brexit. The evidence suggests that Brexit would quite quickly become about the economics. One of the reasons Brexit can happen is that its economic costs are not immediately visible. It is experienced but not isolated as a Brexit effect. It can be estimated to a reasonable degree of accuracy by experts, but the Brexit press keeps going on about the pre-referendum Treasury forecast and the broadcast media prefers a quiet life to routinely quoting these expert assessments. Brexit is not about the economy only because Leave voters are being kept in the dark about the impact Brexit is already having.