The UK’s place in the world 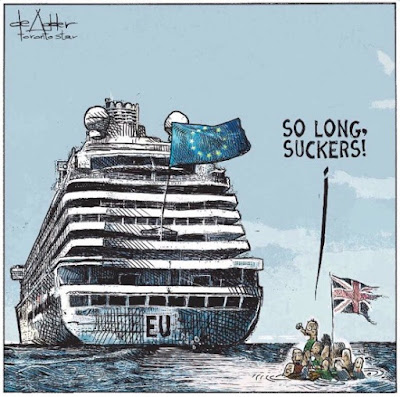 As an economist, I naturally focus on the economic aspects of the EU. The EU is mostly about economics. To counterpoise sovereignty as an alternative perspective to economics misses an important point: most EU rules stem from the economics of free trade within the EU. The EU wants common regulations to make it easier to trade. The EU wants restrictions on state aid to prevent countries giving their own firms an advantage over others in the union. Much the same applies to labour market and environmental standards.

Economics is also involved in another aspect of being in or out of the EU, and that is how the UK sees its place in the world. Is the UK’s identity partly a European identity, or does the UK ‘stand alone’, independent of all multinational blocs. Anyone interested in this question should read an excellent and compact essay by the ‘Red Historian’, Robert Saunders.

Those who want us out of Europe need to address why the UK became part of Europe in the first place. After the war, the UK had tried a different strategy. After all, being part of Europe did not look very attractive in the aftermath of a war that had destroyed large parts of it. Instead the UK tried to forge its place in the world based on its history, a history of empire.

This involved three elements: the remains of Empire, the Commonwealth, and our special relationship with the US. Harold Macmillan spoke of Britain playing ‘Greece’ to America’s ‘Rome’, acting as a wise counselor to its idealistic but naive successor. But that strategy failed, because neither the Commonwealth or the US were particularly interested in playing their allotted roles in this scheme.

Two quotes from Saunders’ essay are indicative. The American Dean Acheson said ‘The attempt to play a separate power role’, he declared, ‘a role apart from Europe, a role based on a “special relationship” with the United States, a role based on being the head of a “commonwealth” which has no political structure, or unity, or strength … this role is about played out’. Privately, Harold Macmillan agreed: ‘all our policies at home and abroad’, he lamented, ‘are in ruins’.

This is why we became a part of the EU. The UK wanted to continue to play some significant role in the world, and our attempt to do so independently of Europe had failed. So now we have left the EU, is there any coherent vision of an alternative strategy?

In the Brexit debate you can hear an echo of the failed post-war strategy. No trade deal with the EU is now apparently called the Australian relationship, because that sounds better. We also hear an echo of an even earlier history, when appeals are made to the UK’s buccaneering spirit. However, as Adam Curtis explored in a 1999 documentary (HT Adam Tooze), there is a modern counterpart to this, which is the story of how we ended up selling weapons to Saudi Arabia. But as Robert Shrimsley points out, this vision conflicts with the government's new found need to worry about left behind regions with what some ministers call 'legacy industries'.

Yet stories and exceptions apart, the truth is UK industry is not particularly buccaneering. This has nothing to do with being constrained by the EU, as a comparison with Germany makes obvious. In fact the opposite is the case. One of my first jobs after I graduated was looking at the steady and significant decline in the UK’s share of exports in world trade, which was something of an obsession among UK policymakers.

The UK’s weakness is perhaps not surprising in a country where the middle classes regard an engineer as someone who fixes your washing machine. What the UK does well is produce financial, business and other services. But to successfully export these often requires pretty deep trade agreements, like the EU single market. Which is why our export share within the EU rose so substantially after the Single Market was formed. Which major economies are going to enter into the equivalent of the Single Market with the UK?

There is little sign that the current government, and particularly those who lead it, understand anything of this. Comic book stories substitute for solid evidence. They have shown us nothing to suggest that the UK can continue to have any voice among those of dominant players like the US, EU, China, India, Russia and Japan. As Robert Saunders writes

“In writing a history of Britain as a small power, it pretends that nothing has changed: that a nation stripped of its colonies, its industrial power and its control over global finance has the same options today as in the age of its pre-eminence. That means that we are not being serious about the choices in front of us.”


Does the UK need to have a special place in the world? Can we not accept that others will take the key decisions, and we will just have to do what we can in a world over which we have no control? As Saunders notes, in a benign world this might be tenable, but we no longer live in a benign world. This is where the economics of trade re-enters the equation. A UK with no big country or union to help protect it will be at the mercy of any big global player that wants to gain some trade advantage at our expense.

For many in the ERG the implicit answer to this problem is the United States. They are encouraged by Trump’s enthusiasm for Brexit. They fail to see that his enthusiasm is based on antagonism towards the EU and his desire to exploit our weakness. For those who have a nostalgia for days of glory that weakness will be hard to take, as it will be when our legacies of empire are gradually taken off our hands along with the trappings of international influence.

For all these reasons, Brexit is not tenable in the long term, as those who tried and failed to make it work after the war finally understood. Their conclusion will be our conclusion after Brexit: for the UK to flourish in a secure environment it has to be part of the EU. The only question is how long this realisation takes and the manner of our rejoining.